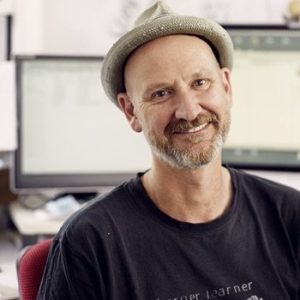 Fascinated by letters since he was a teenager, Wayne began with rub-down lettering and worked as a signwriter, photographer and journalist before settling into the design profession in the – *ahem* – late 1980s. After many years as Art Director, Wayne started Australian Type Foundry in 2001 and works full-time as a type designer, handletterator (technical term) and typography educator. He’s been running the popular Type by Hand series of handlettering workshops for several years, punishing the nation with his lame jokes like this one: Did you hear about the conservative Maltese guy who wanted to save all the fish? He built a Maltese Tory Carp Ark.

To date, Wayne has produced custom typefaces for Animal Logic, Officeworks, Public Transport Victoria, Holden and O’Brien Glass, and spent much of 2016 developing a custom type family for ABC which is currently being implemented across its digital and television networks. He also enjoys working for smaller clients such as a micro brewery who paid him in beer.

Wayne’s aim is to always learn more about typography, and hopefully contribute an Aussie flavour to the world of type design. Wayne has never won any awards.

Watch these presentations by Wayne Thompson Wayne Thompson has presented at these conferences