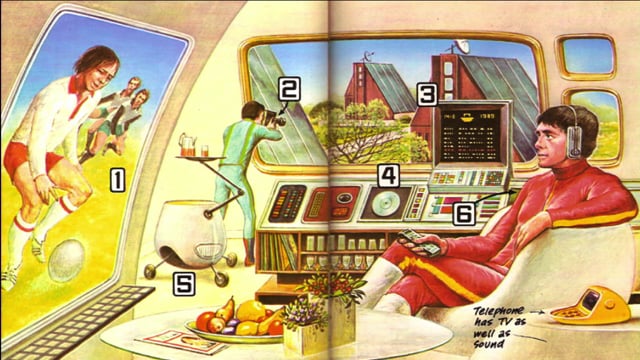 Berg has been developing products and inventing the future since 2005. As a design consultancy, they built videophones with Google, had work in the New York Museum of Modern Art, and created Little Printer, the cute web-connected printer for the home. As a tech startup, they built a platform for connected products, and used it to make everything from cuckoo clocks to washing machines.

Join Berg co-founder Matt Webb for a dive into design, interconnectedness, and the Internet of Things.

Shots from paleo future. Amazing to see what people thought the future would be like… how close they were on some things, how far off on others.

Kubrick did get the video chat experience right in 2001 – the dad’s sitting down being serious on a phone call… but the kid’s flopping about, doesn’t care that she’s chatting with daddy who is in space. This is entirely the Skype experience.

2001, like music, succeeds in short-circuiting the rigid surface cultural blocks that shackle our consciousness to narrowly limited areas of experience and is able to cut directly through to areas of emotional comprehension. – Kubrick

The death of HAL is actually very sad, you actually feel that someone is dying.

Theory of bottleneck events – there is some genetic evidence that human population massively dropped 50,000 years ago (possibly caused by a massive volcanic eruption) and recovered again.

Origins matter. What was there when the world was writ small will be there when it is writ large.

Curious case of the myths of the Dogon people in Africa – their myths about Sirius included the accurate information that Sirius is actually two stars. Were they really visited by aliens? Or did some astronomers visit them…

There is a myth that stellar dust is sentient and it drags matter together to be reborn as stars. It’s a nice thought…

The japanese have the notion of ‘artefact spirits’, Tsukumogami. When an object reaches 100 years old it becomes sentient, has emotional reactions to its life. However the idea is not applied to modern items… do new things not have souls?

> The network is the new electricity

> Connecting products is the 21st century equivalent of electricification

Edison had to launch a power station as well as a lightbulb… and then get cables laid. The first station in NYC powered a whopping 400 bulbs. He also had to create the electricity meter so he could bill people. It was all very startup.

Station Jim at Slough railway station – a much beloved dog that rode the trains and had a charity collection satchell. So when he died they taxidermied Station Jim and stuck him on Platform 5. “Yes… this is weird.” So Matt tweeted about it… AND GOT A REPLY ON TWITTER from @stationjim … with some cheeky attitude!

Where we start matters.

Electricity led to electric motors. This didn’t immediately replace factories but it created small appliances… fractional horsepower motors were successful because they were less powerful, but small.

[At some point Matt brought the house down by showing this…

…and then after talking over it for a minute, observing “none of you have heard a word I’ve said, have you?”

Around the time Doug Englebart delivered the Mother Of All Demos, a book “Computer Lib” was released – with the tagline “You can and must understand computers NOW”. Features lines like “Everything is deeply intertwingled”.

If we look to Tsukumogami, perhaps all the new devices were waiting for electricityto become 100 years old! (“…ok, serious face… I don’t really believe the devices are coming to life”)

Familiar concepts cause us to think along predictable lines – Xerox made an operating system that modeled the ideas of moving bits of paper around.

Metaphors shape how we think and they allow us to imagine the future.

The dominant trope of product design in 2014 is Apple.

Jony Ive quote “Why do we assume that simple is good? Because with physical products, we feel we can dominate them. As you bring order to complexity, you find a way to make the product defer to you.”

We humanise technology – Little Printer was a prime example, using the face to indicate the state of the network and the device. 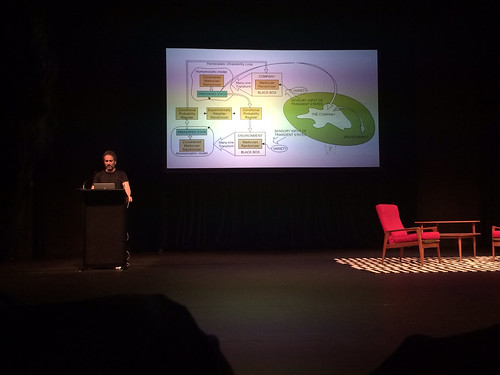 [slide: Homeostatic Ultrastability Loop… designed by Welsh cyberneticist Stafford Beer to model companies. He tried to model this with a pond…!]

Everything starts somewhere. [slide: top of JFK’s head backed by the sky…] JFK set down the dream of going to the moon. It took ~ 100 million man-hours of effort after that. Yet only about 12 people walked on the moon for a total of 160 hours.

So what’s the equivalent of the moon landing for our generation?

So which do we prefer to have? 12 people on the moon, or wikipedia available to all humanity?

So what would happen if you put aside 100 hours over summer (an 8 hour day a week), then choose something to spend those 100 hours on. Ask people at #wd14 what they will use their 100 hours.

Matt got an email from someone who used their 100 hours to set up Pork Camp – a food festival from farm to plate. Later on Matt got in touch again and he’d done it again and TV producers were interested in the next food journey…

Beginnings matter. Culture is established at the beginning.

The web is egalitarian. It’s a level playing field. It routes around deference… “in a way, the web is an Australian medium.” An Introduction to the File API